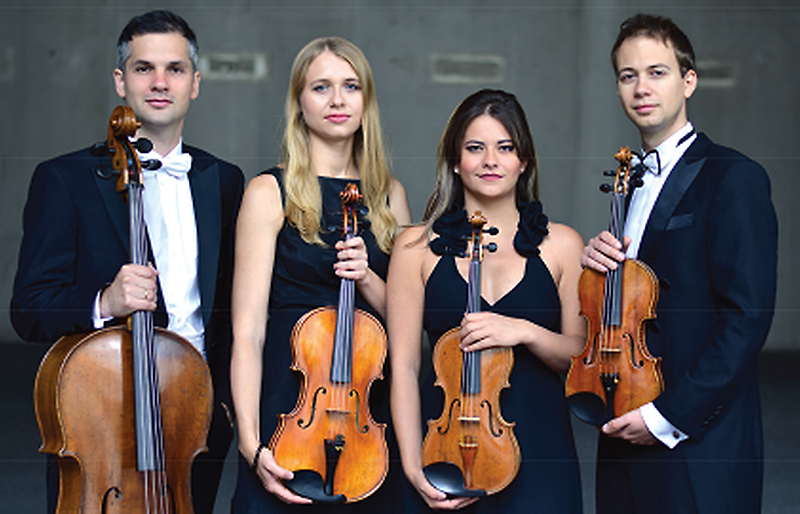 presented by the  AUSTRIAN EMBASSY in  Copenhagen

The concert will take place at the Italian Institute of Culture

The concert will be followed  by a Vin d’Honneur,  as well as  Meet&Greet with the Artists/Musicians

For the concert the AUSTRIAN EMBASSY kindly offers FREE ADMISSION

however you are kindly asked to register

Praised for their "stylistic confidence and willingness to impress with emotions - for all four of them chamber music seems to be the essence of music itself"; (Austrian National Radio ORF Ö1, "Intrada") the Viennese Auner Quartett is rapidly making itself known in the chamber music world. Formed out of the Violin Duo "Mozartiano" in the spring of 2013, the Auner Quartett brings refinement and prowess to both new and established repertoire. The group holds a special residence in Vienna, performing monthly in the baroque hall of the former Vienna City Hall, today known as "Bank Austria Kultursalon".  As passionate chamber musicians, independent from any contracts with orchestras, the quartet strives to not only explore the extensive quartet repertoire, but also to present their unique voice within the music.

Bringing their musical patrimony and individual emotional approach from Austria, Brazil and Belarus into this musical melting pot (a.k.a. string quartet) but sharing the same educational background, the artists endeavor to use their different cultural heritage and consider it as their vocation to convey music as a spontaneous and original experience.

In addition, the group has collaborated with symphony orchestras for String Quartet Concertos by e.g. Louis Spohr and has been featured repeatedly live on TV and Radio Stations. The quartet sometimes expands its formation by sharing the stage with other musicians. The group is extremely proud to work closely and repeatedly with various contemporary composers. Being there, feeling the atmosphere when composers are writing new pieces, music that will stay, is being considered as one of the main inspirations for the group.

As strong advocates for outreach events and educational workshops, the Auner Quartett is actively searching to engage various communities in diverse ways. Member of the "Rhapsody in School" program founded by German pianist Lars Vogt, the quartet holds workshops in schools, making the often first approach to classical music for listeners a single-entry. In a time of shrinking audiences, the group considers it a duty to personally address new listeners. Social work, often in collaboration with the Austrian Ministry for Foreign Affairs, included masterclasses and performances for numerous youth music programs in Peru, Brazil, Belize and South Africa.

Their two live-albums, “Mozart and Mendelssohn” as well as "Schubert and Villa-Lobos" had been presented on all Austrian classical radio stations and are digitally available exclusively on  "idagio" - the new classical music streaming platform from Berlin. Upcoming releases include new CDs with Simon Reitmaier on the Clarinet - featuring Clarinet Quintets by Mozart, Reger and Leitner as well as a portrait of the chamber music works by Johanna Doderer.?

The Auner Quartett is a partner of the Viennese string manufacturer Thomastik Infeld, working closely on improvements of their outstanding products; the first violinist Daniel plays on an instrument by Giovanni Battista Guadanini - a generous loan from the Austrian National Bank.